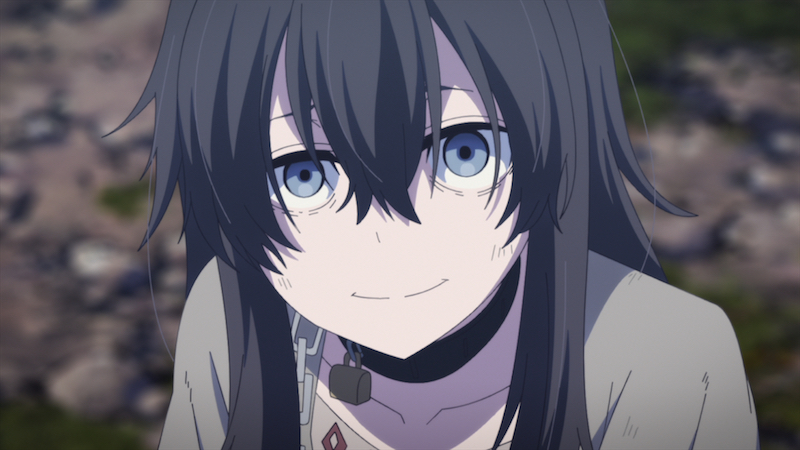 This fun-for-the-whole-family episode goes by the name “In the Clouds,” and is by far the darkest story told yet. This is another episode that has barely anything to do with Kino or Hermes, but unlike Shizu’s foray into the spotlight, this week’s episode tells a riveting and sorrowful tale which is both hard to watch and hard to stop.

The plot of “In the Clouds” is difficult to summarize for this review, as it’s the kind of episode where every new detail contributes something to the story, and even explaining the basic setup runs the risk of spoiling the effect. Very broadly, the story deals with a young woman from a religious country, who was sold as a slave to a group of morally reprehensible traveling merchants. This group of merchants breaks with the Kino tradition of representing the good parts of society along with the bad, in that there is no good to be found among these people. They treat their slaves with contempt, think themselves morally superior due to the ordination of “fate,” and encourage a callous attitude toward human life even amongst their young children. They’re the most stereotypically villainous group this show has portrayed so far, set off only by the equally stereotypical naïveté of the young slave girl herself, who goes to great lengths to repudiate hatred of her captors who have done her so much wrong.

To go on much further would be to ruin the chilling effect that this story works so hard to create, but rest assured that the words “bad end” apply to more than one character in “In the Clouds.” Kino and Hermes show up in the end in nothing more than a token capacity—not so much, even, to bring the story to a close, as simply to remind us that Kino still exists while all the action of this episode is going on. Also introduced is our third talking motorrad—a cute little Honda Motocompo with a brash, realist’s outlook on life (which had been previously visible for a fleeting moment in the intro, along with this episode’s protagonist).

This episode is probably the strongest, thematically, of the new Kino so far—it’s certainly a tale that holds your interest until the very end. It’s a dark story, driven primarily by shock value and underpinned by a much more stark version of the trademark Kino moral ambiguity. Although its “slavery is bad” commentary has been done over and over again in many a media form, “In the Clouds” is still a compelling retelling of a moral that even parts of America seem reluctant to learn.

Bonus points to this episode for using a Honda Motocompo, by the way. Seriously, look at this thing. It’s the cutest little moped imaginable!