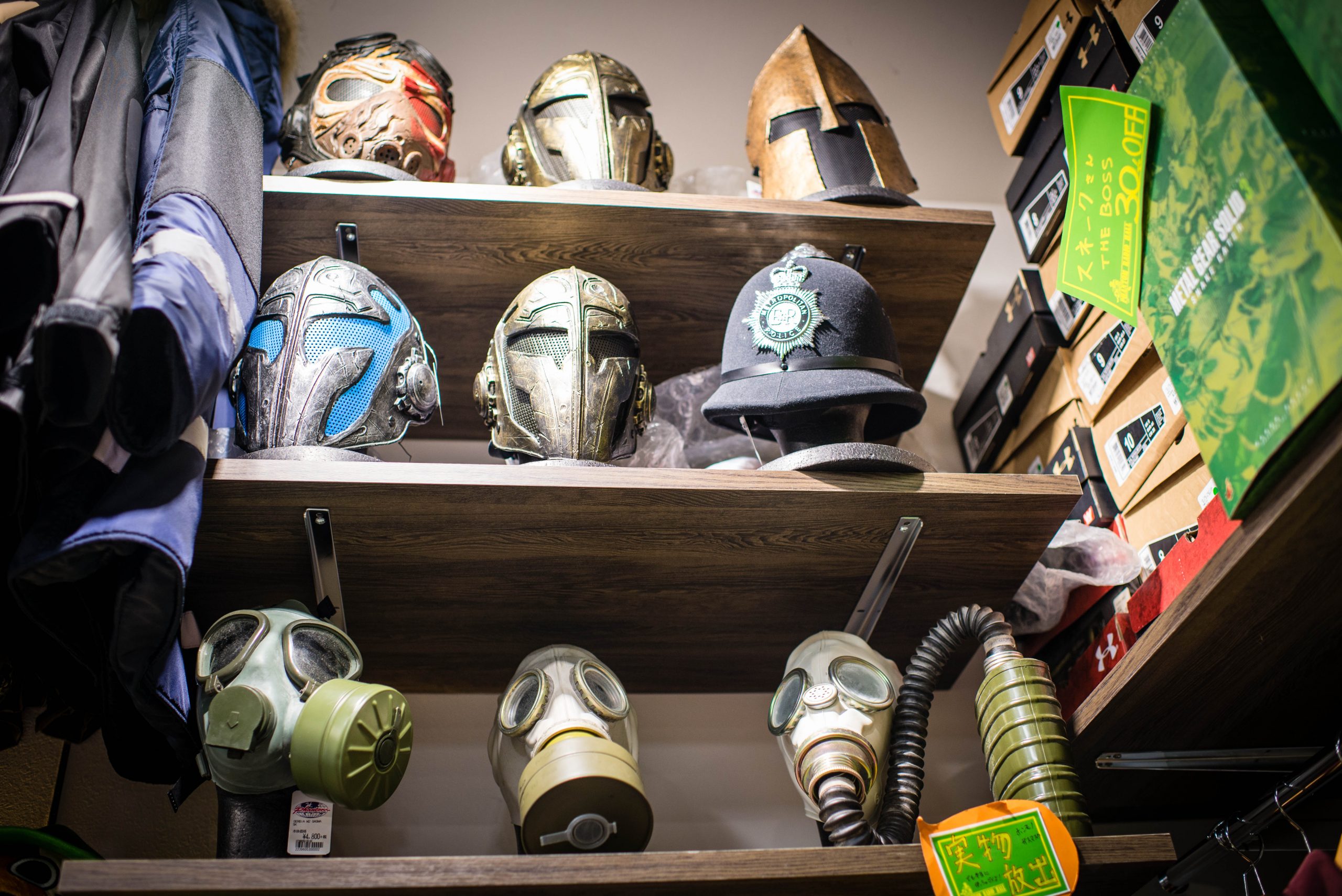 When you think of Akihabara you probably imagine kawaii maids, posters of busty anime girls, game arcades, and used electronics, but there’s another trend taking root in the famous otaku paradise. These days you’ll find that military and tactical style is wildly popular with men and women of all ages. Some people even wear military gear as part of their every-day style.

Even though I knew about how popular military fandom has become, I never expected to find a bonafide military supply goods shop, much less one with everything from military uniforms to Monster Hunter character goods.

The 9th floor of the Radio Kaikan building (just outside the west exit of the station) hosts Phantom, a military enthusiast’s dream come true. Phantom calls itself a military surplus, hobby and toy, accessory, outdoor goods, and real man’s gear shop, and they have the stock to prove it.

Part of a small network of Phantom stores, this particular store caters to the Akiba crowd by providing real tactical gear alongside character and video game goods like Monster Hunter, and Biohazard/Capcom. After I saw the logo I recognized this store because there is one in my city, but this shop is a little different from the Phantom store near me.

True to the Phantom brand name, this shop had backpacks, combat boots, hiking shoes, police and military uniforms, and everything in-between. In addition to what you’d expect from a surplus store I also found fingerless gloves, shemagh scarves in a wide variety of colors, and several shelves of durable performance jeans, slacks, shirts, and jackets in a range of sizes.

I found something interesting in every corner of the store. They have some seriously cool stuff, including gear from some top of the line brands like Under Armour, 5.11, Oakley, Blackhawk, Subdued, and Kryptek. They even carry airsoft guns, waterproof ink, and prison jeans (denim jeans handmade by actual prisoners).

In addition to novelty items, they have practical supplies, too. Phantom has a pretty impressive display wall of survival gear with all sorts of carabineer hooks and safety whistles, and flashlights, and everything else you’d ever need for your bug-out bag. Speaking of emergency kits, we all know that no kit complete without food rations and Phantom has survival food supplies and MREs (military lingo for Meals Ready to Eat), complete with cute anime girls in military and police uniforms on some of them.

After talking to the owner, Onishi-san, I learned that this location just celebrated their 1-year anniversary. When asked what got him interested in military supplies he told me that he’s always loved military video games (first person and second person shooters), and had over 200 American games that he enjoys playing, so it’s obvious that he knows what his customers want from their tactical shopping experience. I’d say opening a military supply shop is the next logical step for a tactical gear fan like Onishi-san, and it’s pretty great that he can do something he loves for a living.

Phantom is also a fantastic place to find a really cool and useful gift. I saw several items that would make great gifts for the tactical enthusiast or outdoorsy person in your life. Budget conscious otakus will be happy to learn that Phantom offers many items that are relatively inexpensive (under $25 USD).

My husband is in the armed forces and likes this kind of stuff, so naturally I had to pick him up a little gift. He’d said in the past that he wanted one of these little grenade shaped coin cases and this was the first time I’ve seen one besides the standard brown, army green, or black. Thanks, Phantom!

I look forward to going back to visit the shop again, but this time I’ll be sure to take my husband. I’m sure he’ll find some cool stuff that I somehow missed. Next time you’re in Akihabara be sure to take a trip up to the 9th floor to see what cool stuff you can find at Phantom, you’ll be glad you did!