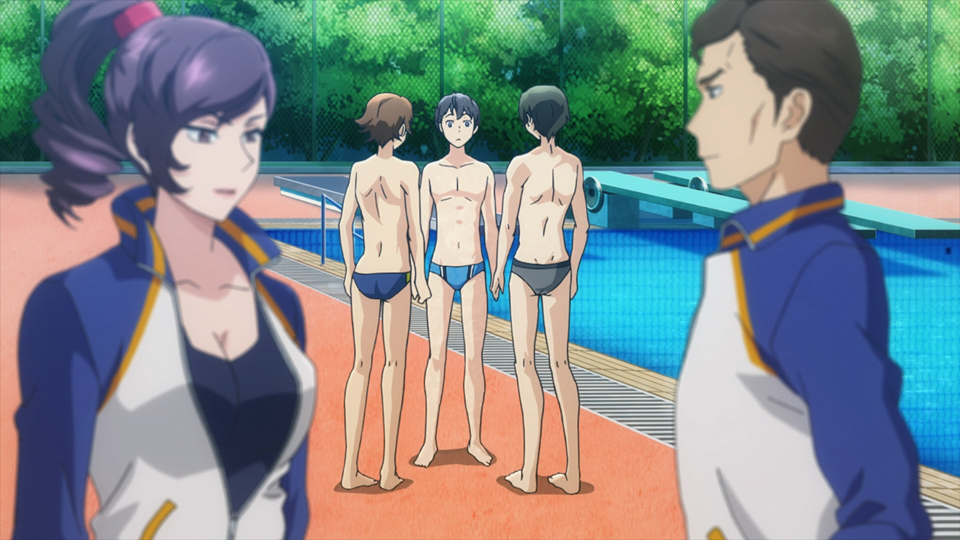 Dive!! Episode 3: No heart or Authenticity

Episode three of Dive!! kicks the plot into motion

There’s an exclusive training camp for the best young divers in Asia coming up, and Kayoko is determined to get her students in it. Yoichi, with his elegant, classical form, and Shibuki, who brims over with raw talent, are clearly shoo-ins, but what can Tomoki do to set himself apart from the other applicants?

An answer to this question is provided a quarter of the way through the episode: a diving move known as the three-and-a-half turn, the specifics of which the episode describes so blandly and quickly that I have already forgotten what they were. In any case, it’s an especially difficult move that few middle-schoolers have mastered. Tomoki now has a defined goal to work towards over the next couple of episodes

Happily, for him, Tomoki’s hard work outside of practice is paying off. Kayoko notes that his agility and core strength have visibly increased, which will help him master the key move.

Kayoko’s focus on Tomoki has not gone unnoticed by his lazy teammates, who coldly exile him from their friend group halfway through the episode. They’re acting like a couple of jerks, but no doubt Tomoki’s eventual triumphant performance will bring them back around to his side.

There’s no heart or authenticity

The plot is definitely moving now, but I still don’t feel pulled in by any aspect of the show in any significant way. Every single member of the cast continues to be a stock character without any unique characteristics whatsoever. The show makes token attempts at characterization – this week it’s Yoichi’s turn to have a piece of backstory revealed, namely that he once had a bloody diving accident that led to him going back to the sport for the sake of the comfort of others, rather than his motivations. It’s hard to care about any of this, to be frank since it appears very by-the-numbers, as if the writers decided, “Well, everyone needs to have an angsty backstory, right?” and pulled something out of a hat for Yoichi. There’s no heart or authenticity to any of it.

The writers’ handling of Miyu in particular sticks in my craw. Her entire existence in the show revolves around providing moral support to Tomoki, who doesn’t even seem to like being with her. The poor girl makes him a huge sampler bento box full of intricate and lovingly-constructed hors d’oeuvres, and the best he can muster in response is a whiney, “Isn’t this a lot of carbs?” before he begrudgingly samples a bit of hamburg steak.

The actual artistic content of the show seems slapdash and unpolished

The art remains a sticking point. Dive!! airs on Fuji TV’s Noitanima, a programming block known for slightly higher artistic ambition. It’s also odd because the visuals in the opening and ending sequences are quite lovely – expressive, fluid, sumptuously colored. The actual artistic content of the show seems slapdash and unpolished. As far back as episode one, characters’ faces change shape in odd ways from different angles. Not only is this still a problem, but how strangely proportioned, and stiff the characters’ bodies look, especially in wideshots is hard to ignore.

In a show where the cast spends the overwhelming majority of their screen time half-naked, this is indisputably an issue. At this point, I want nothing more than never to be visually bombarded with any more hastily drawn, lopsided eight-packs ever again.

The introduction of the three-and-a-half turn as a concrete goal for Tomoki to conquer will no doubt provide enough material for the next episode or two. We might even see the training camp meet next episode if things keep moving at a brisk clip.