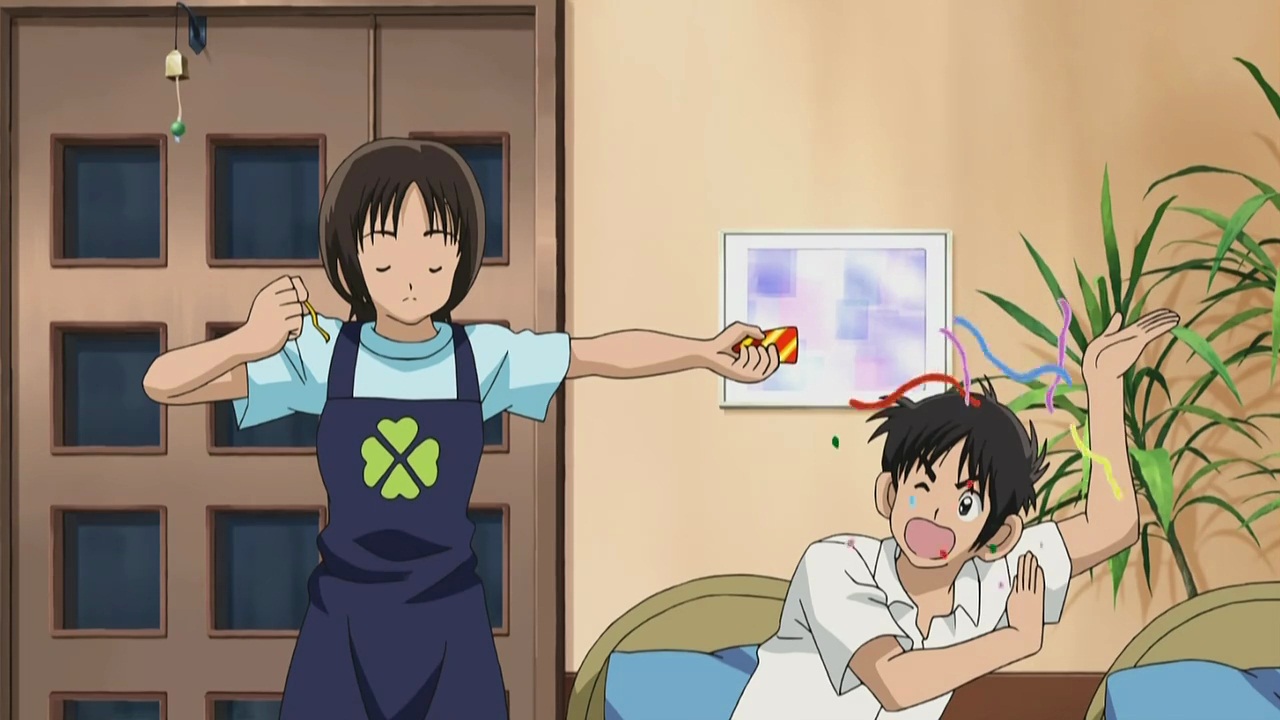 Baseball, only as a storytelling vehicle

Cross Game is a baseball anime in the sense that its main characters play baseball. But unlike shows like Haikyuu or Yuri!!! on Ice, both love letters to the sports they portray, Cross Game uses baseball only as a storytelling vehicle. Anime fans should recognize the high school setting and the slice-of-life storytelling that follows Aoba and Kou’s perplexing relationship, but they might not appreciate the delicacy and grace with which the show handles its main characters. Transcending the familiar story of love, loss, and recovery into a joyful portrayal of romance, grief, and friendship, Cross Game deserves multiple viewings by baseball worshipers and agnostics alike.

The story follows Kitamura Kou, a hotshot baseball player with a hidden work-ethic, and Tsukishima Aoba, a proud and dedicated pitcher with her diamond dreams. The Kitamura family runs a sporting goods store close to the Tsukishima family’s batting cage and cafe, allowing the four Tsukishima sisters to grow up alongside Kou. Sharing any more of the plot might trigger spoilers, not to mention ruin the emotional impact of the pilot episode, an episode so good they showed it twice during the show’s 50-episode run.

Not a single one of these 50 episodes drags, disorients, or distracts from the main plot. The pace smolders like an all-night campfire, allowing the humor to flow naturally and the grief to feel genuine, even as melancholy floats like a marine layer throughout every episode. All of the secondary characters grow with the story and bolster a conclusion that could only disappoint the insatiable, making this classic show as tight as the stitches on a brand-new baseball.

Cross Game’s artistic beauty lies in its simplicity. Far from hindering the show, the retro art style and choppy action sequences focus attention on more important matters, like Aoba’s many suitors, Kou’s pursuit of a loved one’s dream, and the rise of a team that finds success through loyalty and sweat. The real artistic genius goes into each character’s facial expressions, which say more than their words ever do, with subtle nuances rarely seen in such a melodramatic and formulaic genre. And because the show efficiently blends its themes and styles, this subtlety extends to the sound engineering, as well.

More than most anime, cicadas score much of the action, sometimes even drowning out the show’s beautiful string orchestration. A ping from an aluminum bat or the pop of a catcher’s mitt is the biggest sound the show produces. Far from the loud action, most sports dramas emphasize, the show’s quietest moments deserve the most appreciation. Few shows, animated or otherwise, say more with silence than Cross Game.

The show uses a four-leaf clover made of hearts as its official logo, and though the plant only makes casual appearances throughout the show, it grows as the author’s thesis of love and luck growing hand-in-hand. Junpei Azuma would have never fallen in love with Tsukishima Ichiyo had he not broken his leg on his way to the Koushien Tournament, nor would have Kou been close to the Tsukishima family had he not been born on the same day as Tsukishima Wakaba, whose premonition drives Kou and Aoba closer to baseball glory. Cross Game demonstrates that while love does not require luck, one shouldn’t be surprised if they’re found together.

Above all, Cross Game values emotional honesty and personal growth, punishing those that ignore their mistakes, and rewarding those who turn their failures into stepping stones. This lesson pounds the audience so tenaciously that the will-they-won’t-they aspect of Kou and Aoba’s relationship, a plotline that dominates most other romantic comedies, falls behind each character’s development and loyalty to their friends. And by the time they don’t (or do, I’m not telling), Aoba and Kou feel less drawn together by fate and more attracted by genuine maturity. Like the summer rain sung about in the opening credits, Cross Game drizzles gloom onto a joyous atmosphere, only to wait patiently for the skies to clear and the air to freshen.