Just what the *bleep* is Kill la Kill? 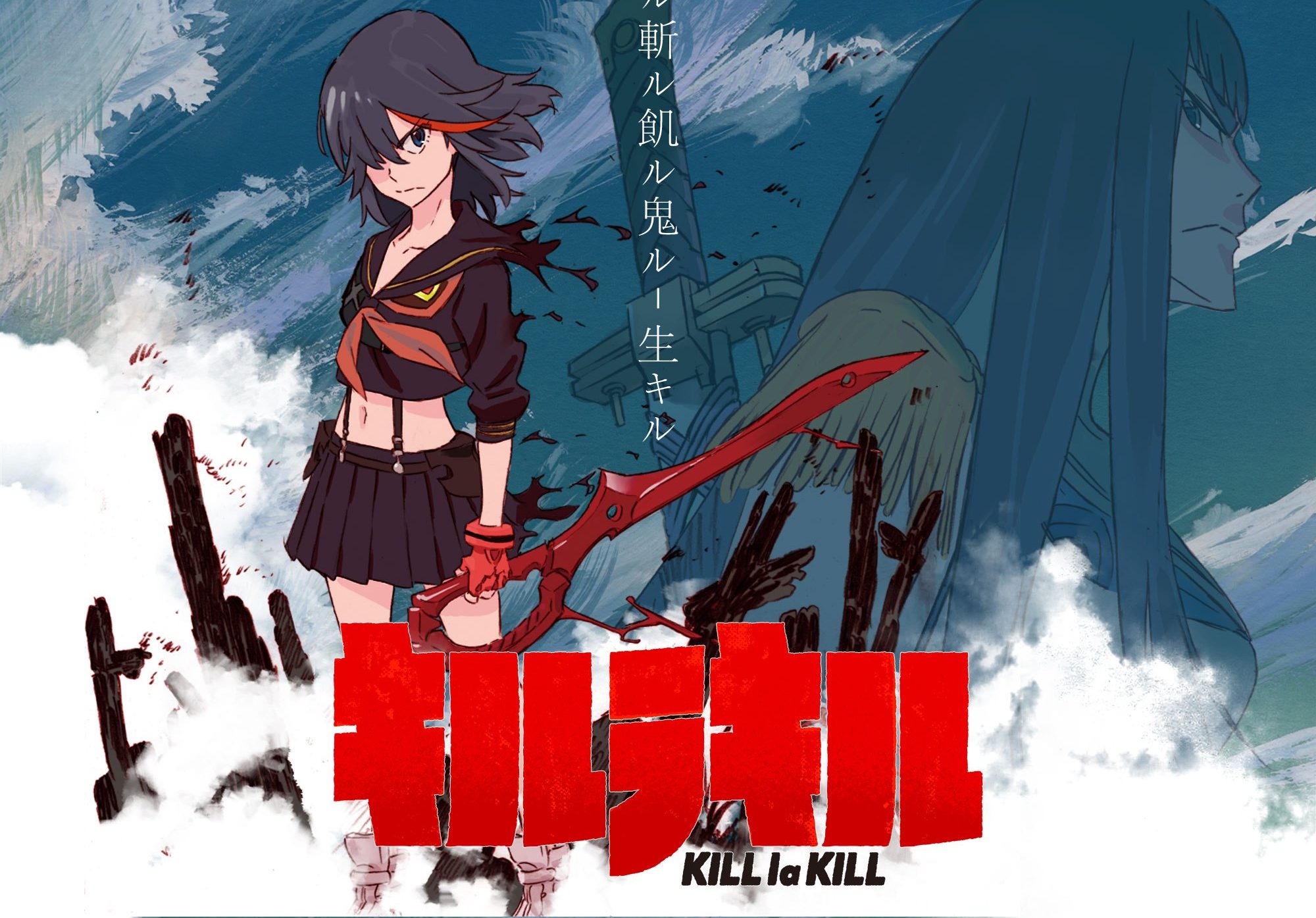 In this series, Tim Taylor asks the hard questions about noteworthy shows from the past.  Previously, he examined Netflix’s Neo Yokio.

The world of Anime is a world of extremes, nowhere moreso than in Studio Trigger’s cult classic Kill la Kill.  From the very start, Kill la Kill is a show that defies categorization.  Is it an action show?  An odd slice-of-life anime?  A work of unabashed perversion?  A lesbian romance story?  In short, just what the <bleep> is Kill la Kill?

The answer, as you might guess, is: all of that, and so much more.  This is all very impressive, as, if you judge Kill la Kill at face value, it sounds like absolute trash.  After all, the show’s premise reads like a checklist of all the problematic tropes plaguing anime today.  Super-long catchprhases?  Check.  Completely over-the-top action?  Check.  Unbelievably gratuitous fanservice?  Check.  Underage schoolgirls?  Check.  High school uniforms?  Check.  Non-consensual situations?  Check.  Characters stripping all the time?  Check.  How could a show with so many checks be anything but trash?

The answer lies in Kill la Kill’s handling of its various tropes.  In so many shows, the above laundry list are essentially addenda; bolt-on elements not necessary in any real way.  In Kill la Kill, however, these tropes are the very foundation of the world itself—the fabric upon which the rest of the show is built.  Remove any individual one, and the show would simply no longer be Kill la Kill.

To illustrate, let’s turn to a summary of the show’s plot.  Satsuki Kiryuin is the class president of Honnouji Academy, a fascist high school at the center of a feudal town.  While most schools are run by a principal and staff, Honnouji Academy, and even the surrounding town, all bow to the will of the godlike student council.  Students’ social status is reflected in their school uniforms: those with merit wear 1, 2 and even 3-star Goku Uniforms.  These uniforms are woven with nearly-indestructible Life Fibers, a strange alien fabric with tremendous performance enhancing abilities.  Using Life Fibers, the Kiryuin clan plans to conquer all of Japan, by controlling the minds of the youth through a campaign of inter-scholastic warfare.  Into this hostile environment comes punky orphan Ryuko Matoi, who wears a special, sentient uniform made entirely of Life Fibers.  This uniform, known as a Kamui, feeds on her blood for power and only achieves full strength when it has shrunk to G-string levels of skimpiness.  Armed with the Kamui and half of a pair of scissors that can cut through Life Fibers, Ryuko does battle with Satsuki’s corrupt regime, seeking answers about her dead father, whose demise had something to do with Satsuki, Life Fibers, and a mysterious group of anti-Life-Fiber rebels called Nudist Beach.

Despite ticking off every sophomoric cliché in the book, Kill la Kill takes on the heavy responsibility of subverting each and every trope it uses to build its world.  Characters are treated in a surprisingly mature way, with relatable motivations and true growth arcs.  Far from a despotically evil villain, Satsuki is revealed to be a complex, damaged individual with a difficult relationship with the family she outwardly supports.  Ryuko, too, grows and develops, with a story that is surprisingly body-positive and sexually empowering.  The colorful supporting cast members each receive respectful, complex backstories that engender a surprising amount of investment for what are the show’s ostensible “villains.”  Even the T&A, or perhaps it might be fairer to say “exposure,” as the show is remarkably gender-neutral about whom it exposes, serves an integral purpose. The need for exposure is thoroughly explained within the context of the show’s own pseudoscience and culture, turning it from fanservice into a central part of the world’s mechanics.  Ultimately, the show manages to draw an impressively subtle distinction that’s not often seen in anime: the difference between exaggeration and gratuity.

What makes Kill la Kill great is the fact that it is an over-the-top show, but not a gratuitous one.  For better or worse, it is a show that can be enjoyed by members of the heterosexual male community at face value, but to do so sells Kill la Kill woefully short.  Whereas other shows would use Kill la Kill’s clichés cynically, for the sole purpose of selling more copies, what makes Kill la Kill unique is the fact that it uses these elements to make broad social commentary.  Kill la Kill has something to say on topics as varied as: women’s rights of sexual expression, body-positivity in a culture of constant sexual exploitation, the Japanese educational system, conformity to socially accepted behaviors, and even fascism.  Kill la Kill’s moral can be expressed thus: “In a culture which seeks to exploit women’s sexuality for its own gain, a woman’s best weapon is to take comfort in her body and joy in her sexual identity.”  Almost sounds like a 1960s manifesto, no?

Thus, Kill la Kill is one of a very select pool of shows that really rewards viewers based on how much they are willing to invest in the show. The more you put into it, the more Kill la Kill gives back, so to speak.  If the show has one flaw, it is only the same flaw that plagues any adept work of satire: it is, perhaps, too easy to write the show off as a particularly good example of the thing it seeks to subvert.  To be fair, Kill la Kill is not the sort of show you’d want to watch on your phone in public, but it’s also the sort of show that makes you question why an overtly sexual show must automatically be taboo.

So what the *bleep* is Kill la Kill?  The honest answer is: it is what you want it to be.  If you go into it looking for stimulation, you won’t be disappointed.  If you seek stylish action and violence, it’s also the show for you.  If you’re the type that cares to read between the lines and are inclined to sift through the layers of hidden metaphor, you will also be handsomely rewarded for your time.  In fact, the only thing Kill la Kill is not, is trash.