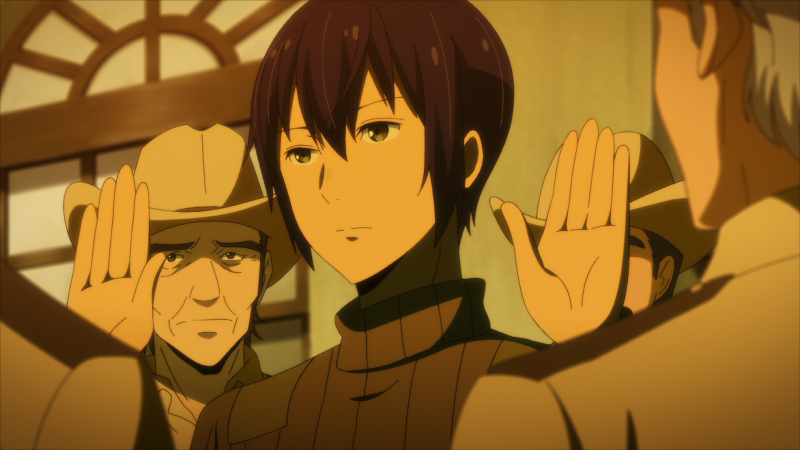 A commentary on American politics?

Three weeks and counting. That’s how long it’s been since we’ve had an episode that involved Kino in any meaningful way. Shizu and his diverse gang take center stage for a second time in the most recent episode, “Country of Radio Waves,” but fortunately this second Shizu story manages to make itself interesting by telling a tale that’s pretty easy to interpret as a commentary on American politics.

The Americana starts with Shizu properly healed after the somewhat shocking conclusion of “Ship Country,” motoring toward a new country. In contrast to Kino’s seemingly endless traveling lifestyle, Shizu makes it very clear that he is only traveling until he can find a country stable enough in which to settle down. This week’s country seems an attractive prospect due to its stable economy, vast size, generous immigration policy and easy access to pizza. Sound like somewhere we know? The American connection is further reinforced by the visuals this week: the animators do a pretty good job of capturing the look-and-feel of a seedy town in the American southwest, where Shizu’s trademark dune buggy blends right in.

The intrigue comes when a deranged man emerges from a school across the road from where Shizu has stopped for gas, covered in blood and swinging a severed head. After assisting the police in subduing the man, the chief of police informs Shizu that the man who carried out the brutal school massacre was not responsible for his actions. Instead, he was being controlled by sinister radio waves, which are regularly emitted from ancient towers that have a singular effect on the people of this country due to a historical connection with slavery and mind control. Shizu smells a rat and goes to investigate, finding, as one might expect, more than meets the eye.

While the story of this episode is not entirely original, and Shizu’s dialogue still a bit forced, this episode is noteworthy in that it can be read as a direct commentary on American politics, which is a topic few other anime dare to cover. The setting, the obvious parallels to recent American school shootings, and the country’s history with slavery are all too similar to the real-life country to be mere coincidence…but this similarity begs the question: what exactly is this episode trying to say about American politics? Despite the elaborate and distinctly evocative setup, the story’s conclusion is as morally ambiguous as one would expect from Kino, with little obvious application to the real-world situation, other than perhaps the observation: “they’re all deluded, and we might as well leave them alone.” Actually, I take it back.  Maybe this episode is a little too insightful. Either way, it is certainly thought-provoking, and much more worth a watch than Shizu’s previous stories.