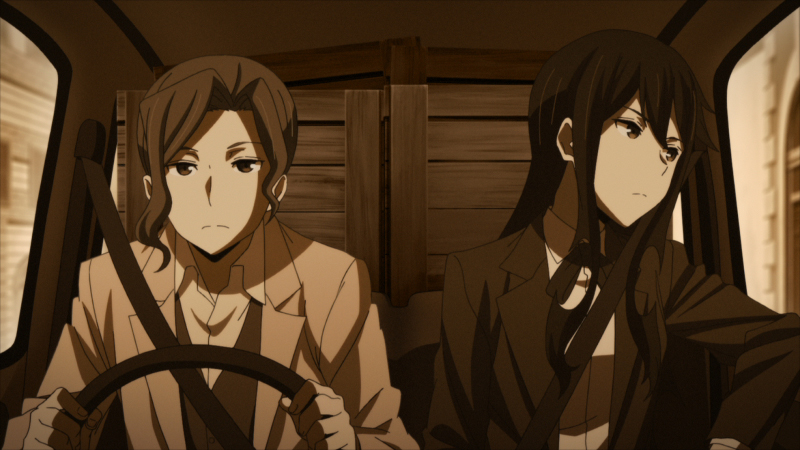 A look at a significant person in Kino’s past

Continuing the trend of Kino episodes not focused on Kino herself, Episode 7, “Historical Country,” tells a tale from the life of “Master,” a significant and mysterious person in Kino’s past. Finally giving us a glimpse of the person who taught Kino her traveling, gunslinging trade, this sepia-toned episode feels a bit like Bonnie and Clyde…but with a happier ending, thankfully.

This twice-retold tale takes place in a country that looks reasonably Italian-inspired, with wide piazzas and a central clock tower overshadowing all else. The Italian metaphors don’t stop there either, as the country is controlled by an overbearing police force which smacks of Mussolini and fascism. When Master and her unnamed apprentice drive into town, they seek merely to sell some valuables, replenish their provisions, and be on their way. Fate (or fascism) deals them a different hand, however, when Master’s apprentice is busted on trumped-up charges of drug trafficking. Master, ever the covert moralist (not unlike Kino), decides not to leave her companion to his fate, but instead rescues him and holes up on the highest floor of the clock tower, precipitating a standoff that will forever change the politics of the country.

While the storytelling of this episode doesn’t tread especially new ground or hit any particularly resonant emotional notes, the episode is noteworthy for the insight it gives us into Kino’s heretofore inscrutable character. Granted, it doesn’t pick the lock on Kino’s tightly closed brain, nor grants us any further insight into why the inscrutable Kino does what she does, but it does at least answer the question of where she gets it from. Master is portrayed as essentially Kino Plus: scheming, impassive, unrealistically adept, and rigidly, ruthlessly moral. In fact, the only significant way she differs from Kino besides her age is in her choice of companion: Master chooses, in this story, to share her action with a human comrade, rather than a motorrad. More than anything, this is what sets Master higher than Kino on the itinerant-gunslinger-traveler-totem-pole; the fact that Master is competent enough to take on apprentices, and deal with their inevitable blunders, while still pulling off the kinds of spectacular plans and victories that Kino is only capable of accomplishing by herself. This realization makes for an interesting effect: while it does clearly show where Kino got her extensive training from, it does nothing to sate our curiosity for how exactly Kino came to value the traveling lifestyle that Master had…well…mastered. I know, I know.

Overall, this episode is a fun little gunslinging story with a simple but timeless moral, which is well worth a watch if only to lap up the few crumbs of insight it gives into Kino’s character. Still…I do sincerely hope next week’s episode focuses on Kino again.